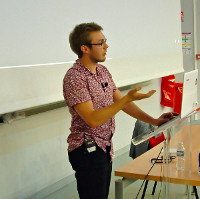 Hello, my name is Jean-Loup Adde and I am a 25 year old Site Reliability Engineer at Blockchain. I love experimenting and using new technologies around software and web development. I'm quite a passionate to make life easier for users but aswell for developers and that's why I'm huge fan of continuous intgeration and automatization.

Where have I studied ?

Where have I worked?

What have I made?

What can I use ? (Ranked by preference of what I enjoy using)

What languages can I speak?

What do I enjoy doing?